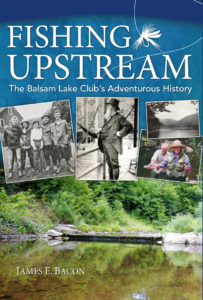 Founded in 1883, the Balsam Lake club exists in the tranquil wilderness of the Catskills less than four hours from NYC.  Together with the local public and key stakeholders, the club has been safeguarding the headwaters of the Beaverkill for more than a century. In his recent book Fishing Upstream: The Balsam Lake Club's Adventurous History, James Bacon, a Balsam Lake Club member for 50 years and HCFC member tells the story of how the fly fishing club evolved and why it has survived and prospered over 135 years. Based on his long association with the club, access to previously unknown correspondence and the recollections of many members and employees Jim relates the never before told stories of the club's history and its fly fishermen's tales (perhaps, some tall tales as well.)

Jin Bacon graduated from both Harvard College and Harvard Law School.  He spent most of his career in NYC as an officer of the American Stock Exchange.

A Zoom event. The link will be sent the morning of the event.