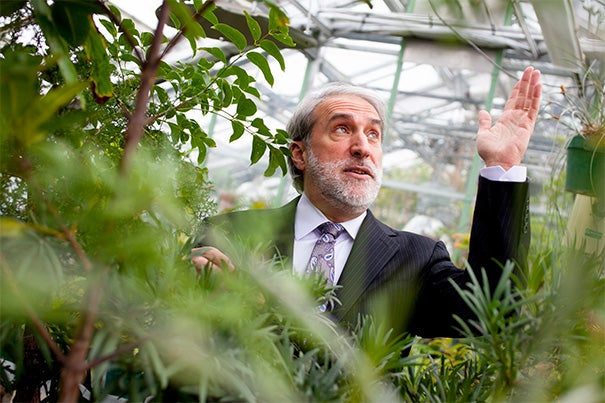 Daniel G. Nocera is the Patterson Rockwood Professor of Energy in the department of chemistry and chemical biology. He created the bionic leaf, a bio-engineered bacterium that uses hydrogen from an artificial leaf and carbon dioxide from the air to make biomass and artificial fuels. The bionic leaf performs artificial photosynthesis ten times more efficiently than a natural leaf.  His discovery could drastically improve the future of the planet.

Professor Nocera's bionic leaf was recognized as the Breakthrough Technology for 2017 by the World Economic Forum. Using only sunlight, air, and water, the nitrogen-fixing bioorganism powered by renewable energy synthesizes food and fuel which is especially relevant for developing areas of the world.  His research has been recognized by several awards including the Leigh Ann Conn Prize for Renewable Energy, Eni prize, IAPS award, Burghausen Prize, the United Nations Science and Technology Award, and the Harrison Howe Kosolapoff and Remsen awards. He was named on of the most 100 Influential People in the World by Time Magazine.

Professor Nocera earned his B.S. degree at Rutgers University and his Ph.D from Caltech.  Before joining Harvard he was the University Distinguished Professor at Michigan State University and then the Henry Dreyfus Professor of Energy at MIT. In 2008 he founded Sun Catalytix, a company focusing on renewable energy.  In 2018, he founded Kula Bio which focuses on developing renewable and distributed crop fertilization and land restoration.