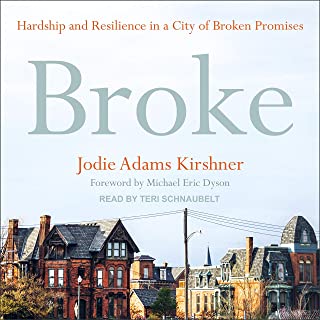 Jodie Kirshner on Bankruptcy in Detroit

A Zoom talk on debt and inequality in Detroit and the devastating effects of municipal bankruptcy on the city's struggling urban poor.

Next in our local alumni author series: Jodie Adams Kirshner will speak about her book, Broke: Hardship and Resilience in a City of Broken Promises.  In Broke, Kirshner explores what municipal bankruptcy does to the lives of city residents.  She follows seven Detroiters as they navigate life during and after their city's bankruptcy. Reggie loses his savings trying to make a habitable home for his family. Cindy fights drug use, prostitution, and dumping on her street.  Lola commutes two hours a day for her suburban job.  Their financial struggles are the result of poor urban policies, restorative negligence on the state and federal level and the city's bankruptcy.

Jodie Adams Kirshner graduated from Harvard with an AB in Environmental Science and Public Policy. She has both a JD in law and MS in journalism from Columbia University.  She was an Associate Professor of Law at the University of Cambridge before becoming a Research Professor at NYU. She also teaches bankruptcy law at Columbia Law School. She is a member of the American Law Institute, past term member of the Council on Foreign Relations, and technical advisor to the Bank for International Settlements.  She received a prestigious multi-year grant from the Kresge Foundation to research Broke which has won several notable awards.

Zoom event. The link will be sent the morning of the event.