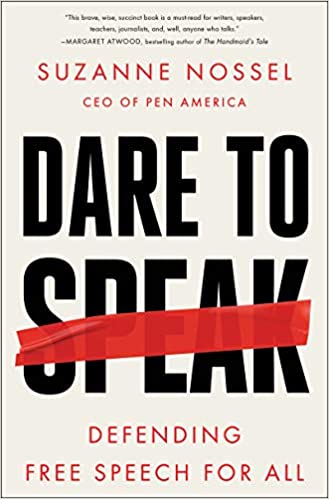 Dare to speak: Defending Free Speech For All

Suzanne Nossel, CEO of PEN America, will discuss her new book Dare to Speak: Defending Free Speech for All, which has become extremely timely as we grapple with a resurgent reckoning over racism.  The book, which draws heavily on Nossel's work at PEN America, deals in depth with call outs, cancel culture, cultural appropriation, online content moderation, how to address hateful speech, and why we need to do more to amplify lesser heard voices.  Nossel sets out principles for how we can live together in our diverse, digitized and divided society without resorting to either formal or informal curbs on free speech. She argues that the drive to realize a more equal, inclusive and just society can - and must - be reconciled with robust protections for free speech.

Author Biography Suzanne Nossel is Chief Executive Officer at PEN America. Prior to joining PEN America, she served as the Chief Operating Officer of Human Rights Watch and as Executive Director of Amnesty International USA. She has served in the Obama Administration as Deputy Assistant Secretary of State for International Organizations, leading US engagement in the UN and multilateral institutions on human right issues, and in the Clinton Administration as Deputy to the US Ambassador for UN Management and Reform. Nossel coined the term “Smart Power,” which was the title of a 2004 article she published in Foreign Affairs Magazine and later became the theme of Secretary of State Hillary Clinton’s tenure in office. She is a featured columnist for Foreign Policy magazine and has published op-eds in The New York Times, Washington Post, and LA Times , as well as scholarly articles in Foreign Affairs, Dissent, and Democracy, among others. Nossel serves on the Board of Directors of the Tides Foundation. She is a former senior fellow at the Century Foundation, the Center for American Progress, and the Council on Foreign Relations. Nossel is a magna cum laude graduate of both Harvard College and Harvard Law School.

A Zoom event.  The link will be sent the day of the event.